Nevada is mainly known as the home of Las Vegas, and while it certainly is that, it's so much more as well! Las Vegas is at the extreme southern tip of the state – the rest of the state is full of inviting, wide open spaces. It's history as a mining state can be seen nearly everywhere north of Las Vegas, with old saloons and other establishments still standing.

There are a lot of places in Nevada that just seem empty. It's a wonderful road trip experience if you're into that kind of thing. Our two road trips here – the Loneliest Road in America and Nevada's Abandoned Places – showcase the crux of Nevada's unique feel.

The Loneliest Road in America

Highway 50 runs 287 miles through the middle of Nevada. It's been called the Loneliest Road in America more than once and there are many local tales of people not surviving the trip. It's such a pervasive myth that it still runs through the highway today. In fact, you can stop and get a Highway 50 Survival Guide on the way. If you can get 5 out of the 8 locations to stamp it with their seal, you'll get a Highway 50 Survivor Certificate. 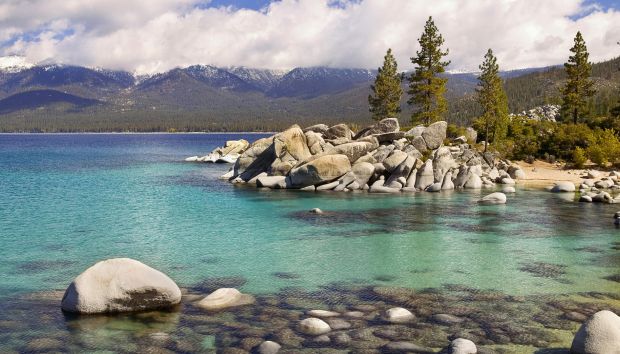 That's amazing, so let's look at the stops you'll have to make if you want to get your hands on that certificate.

We'll start at Lake Tahoe on the California border. It's a large, beautiful freshwater lake with plenty of resorts and recreation opportunities. This isn't part of the Highway 50 challenge, but it's a lovely place to start. When you're finished with the recreation opportunities available here, you can start the roughly 30-minute journey to Carson City.

Carson City is the state capital, and there are a lot of quirky and interesting things to see here. In the Nevada State Museum, there's an underground mine that you can take a look at (to remember the old mining days of the state, of course), as well as a mammoth skeleton and other interesting oddities. Get your Survival Guide stamped here. 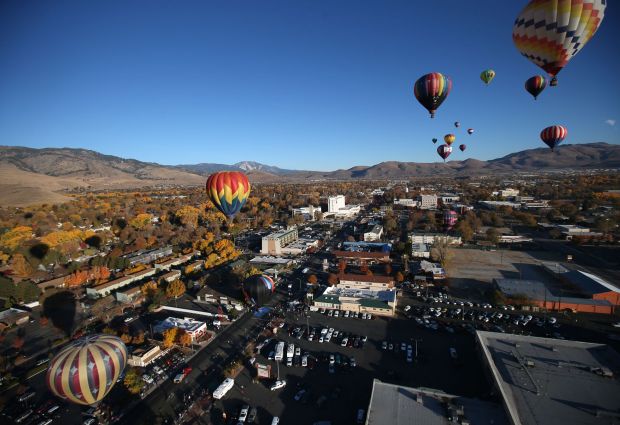 It is 12 miles down the highway to Dayton, Nevada. You'll pass through the small community of Mound House on the way, and interesting stop if you have the time. In Dayton, you'll find the remains of what was once a much large community thriving on gold mining in the area. It grew up around providing services to miners and stayed when the miners moved on. Remember to get your Survival Guide stamped before you move on!

Fernley is our next stop, and it is 38 miles away. You'll pass through the communities of Stagecoach and Silver Springs, both old mining towns and great communities to pay a visit to if the fancy takes you. Fernley is a much larger town with a lot of interesting history, and a Veteran's Memorial. Get you stamp and continue 28 miles to Fallon.

Fallon is the biggest town since Carson City we've stopped at. They have a thriving downtown center here, with plenty of shopping and hometown places to get a bite to eat. They also have Rattlesnake Raceway if you feel like stopping there; they do anything from go-karts to high-adrenaline races. It's a worthwhile town to spend some time in before you head back out to the Loneliest Road in America. 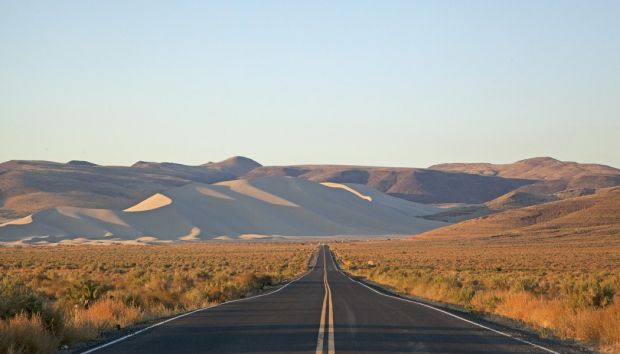 Our next destination, Sand Mountain, is 28 miles away. It is just what it says it is – not a town, but a singing sand dune. This means that the sand makes noise, which may seem like an odd concept to someone who doesn't live in the area. This particular dune makes a 'booming' sound when the sand moves together. It's a strange but rewarding phenomenon to experience if you happen to be there at the right time.

Our next stop is in Austin, Nevada. The main draw to this small town is Stokes Castle, a three-story building that was meant to be a dwelling in 1897. It's modeled after Italian towers made in the same way. It is in the US National Register of Historic Places, and a great place to stop and take some pictures.

Eureka, Nevada is the largest town in the county, at about 600 people. Highlights include the Owl Club Casino and the Eureka Sentinel Museum. This town is a novelty, like most of the places on this highway, for its blend of contemporary buildings and old-west, gold-rush influences. 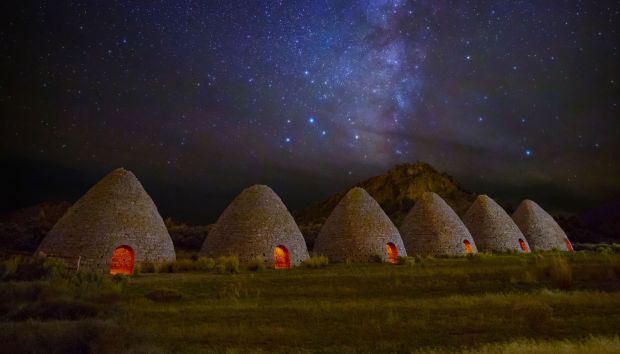 Ely is another 78 miles down the highway. Along the way, you can stop at the Ward Charcoal Ovens State Historic Park, a forested area with a collection of charcoal ovens that were used in the 1800s to process silver ore, and later as a hideout for stagecoach bandits. You can camp, hike, and partake in a variety of recreation here.

Ely is a town that's still enamored with its old-west heritage. There's the Nevada Northern Railway Museum here, as well as some preserved old west buildings that you can stop and look at. Have you been remembering to get your Survival Guide stamped? Get it done here! If you have the time, you can take a short detour up to Garnet Hill, a place where you can look for real garnets. 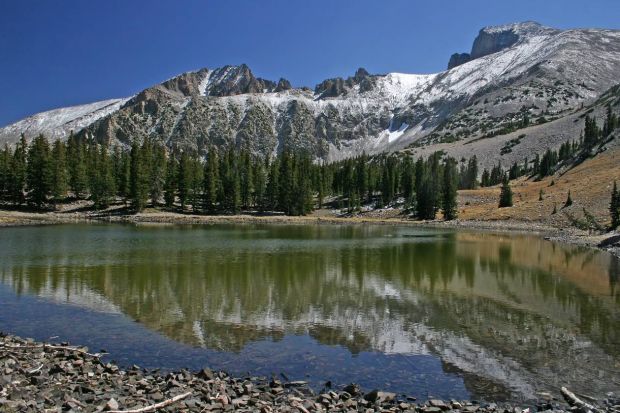 Baker, our last stop on this trip, is 78 miles away. It sits on the gateway to the Great Basin National Park, and one of the major draws there is Baker Archaeological Site, with ruins and artifacts that create an excellent picture of the paleo-Indian Fremont culture.

Did you survive Highway 50? Get your certificate and celebrate crossing the Loneliest Road in America! It's about 300 miles long all told, so it's best to devote a weekend to this particular trip.

When you consider that most of Nevada was colonized by miners and the mining communities that followed them, it's not hard to imagine that there are large parts of the state are abandoned. If the communities didn't thrive, they eventually faded away. Some of the stops on this road trip are still home to a small number of people, but they are, for the most part, full of abandoned buildings and dead-end streets. 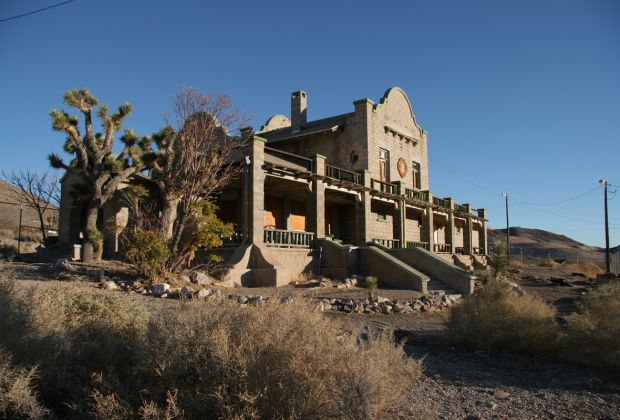 This entire trip, from beginning to end, will take you about 5 and a half hours, as it's mostly over two-lane roads. It covers about 200 miles in total. We're starting at the most southern point, which is Rhyolite.

Rhyolite was a healthy mining town between 1906 and 1920. During this 14-year period, the population peaked at close to 5,000 people and then plummeted to almost nothing when the mines closed. Today, you can observe the ruins of the buildings that were once some of the best-maintained in the state. Get out and take a few pictures here before heading north to Gold Point.

It's 72 miles or thereabouts to Gold Point. This town never really got off the ground like the others, but there are still plenty of gold rush-era buildings here, and they have been preserved remarkably well. Now there is a bed and breakfast as well as cabins and camping opportunities here. 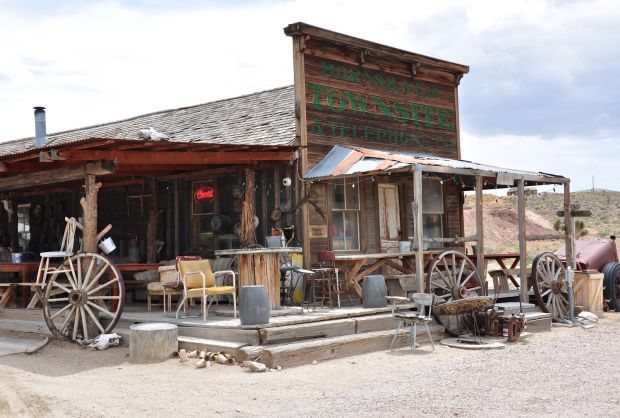 You'll have to go back the way you came a bit to get to Goldfield. This is perhaps the most well-publicized of the towns on this list for a few reasons. The Goldfield Hotel, which is still a functioning hotel, has become a popular haunted location due to a few ghost hunting television shows filming here over the last few years. Also in town is the International Car Forest of the Last Church, a display of several cars standing on their noses, buried in the sand.

From the popular, comparatively booming Goldfield, it's 33 miles to Blair. This ghost town is completely abandoned and has been since 1916. Still, the buildings remain in ruins – the largest stamp mill in Nevada among them, along with a post office, the remains of a hotel, and several saloons. It's eerie, to say the least, to see our recent history so degraded.

Our last stop on Nevada's Abandoned Places is Coaldale, 26 miles to the northwest of Blair. It's the most recent ghost town because it only became completely abandoned in 2006. Up until that point, there was a service station, store, and a motel for weary travelers. The mines were open as recently as 1993 here, so there's still some air of recent habitation here. It makes the ghost town even eerier.

Nevada has a lot of abandoned places, as the mining trade in the area surged and then died. It's always interesting to go and explore the places where our human history has moved on. Highway 50 is not entirely abandoned and not nearly as perilous as it once was, but the touristy aspects of the drive make it one of the best drives in the state. 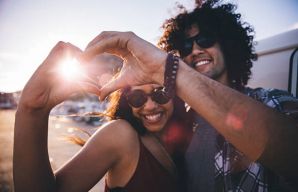 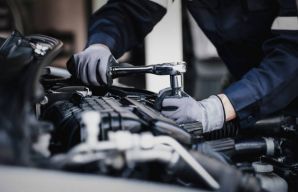 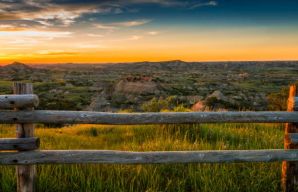 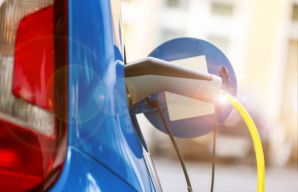 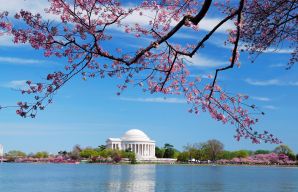 Free Things to Do in Washington DC 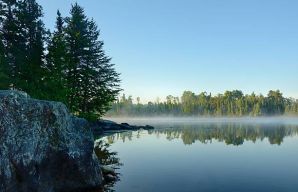